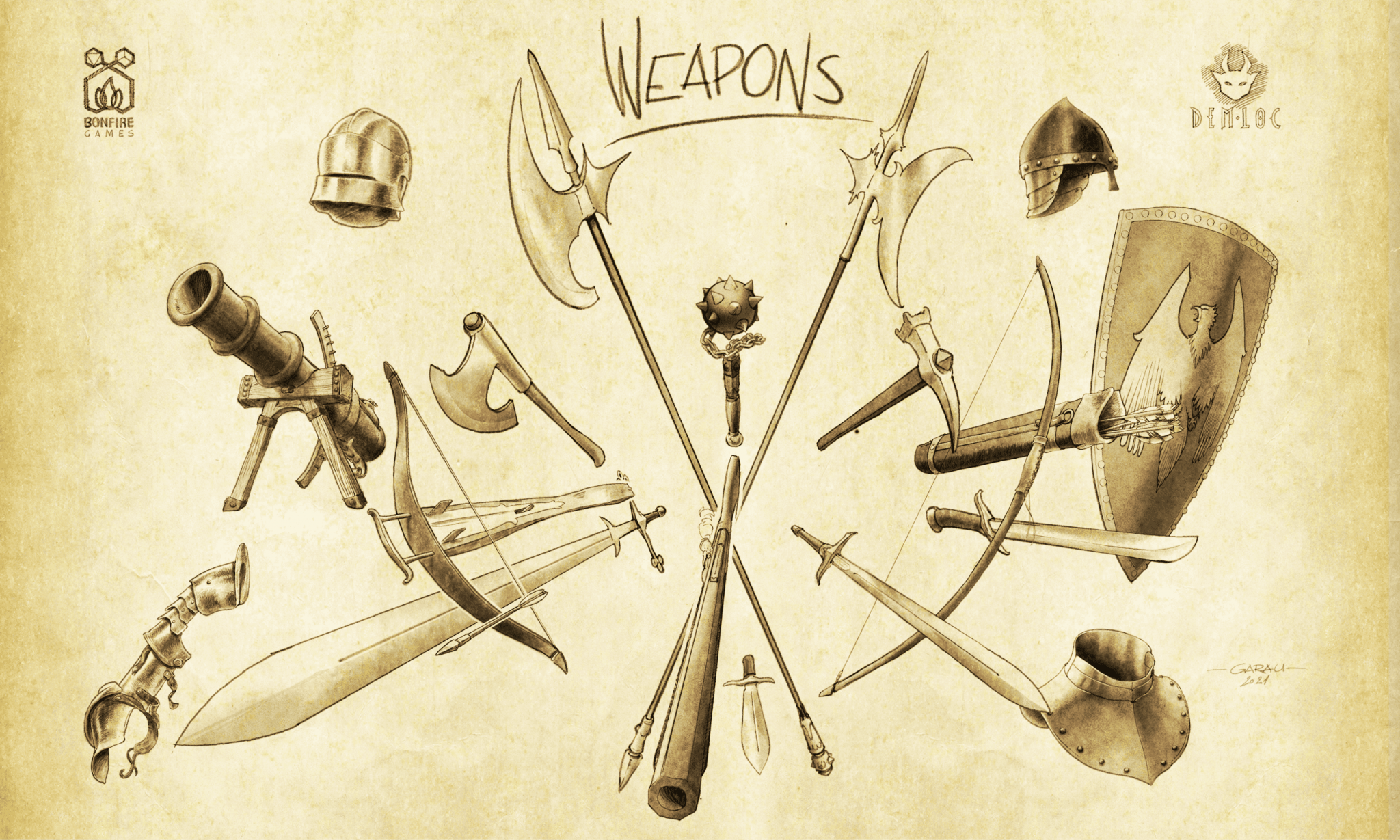 A Guild that has powerful and feared mercenaries in its ranks cannot be considered dangerous if it cannot provide them with the best weapons.

The armory of each Guild is where all the weapons purchased by the Guild Master are stored and where the mercenaries go to equip themselves before each mission.

Weapons are divided into three macro categories based on their function on the battlefield.

The main category is the one of the hand-to-hand weapons: this includes all weapons to be used in brawls and at short distances such as swords, knives, maces, axes and halberds.

The category of shooting weapons includes all those weapons that hit enemies at medium and long distances. Both those using arrows or darts and the new gunpowder weapons are part of this group of weapons.

With improper use, the blacksmiths of DemLoc indicate as Defensive weapons all that equipment that has the purpose of protecting the mercenaries during the fight, such as shields, helmets and armors designed to deflect the cutting blows of the enemies.

Having few feods available, it is normal for an aspiring Guild Master to buy poor quality weapons for his mercenaries. Those weapons could certainly be effective if put in the expert hands of a mercenary but are certainly lacking in materials, weight and handling’s quality.

It will be essential to have many and various weapons available in the Guild’s armory in order to enhance the characteristics of enlisted mercenaries. In fact, many are more familiar with certain weapons rather than others and, if supported, they will be able to perform better during battles.

Each blacksmith who comes under the influence of the Guild will allow to increase the capacity of his armory.
Furthermore, the location of one’s headquarter can be decisive for the Guild Master to have preferential treatment on the price of certain types of weapons, e.g. a Guild founded in the Fort will have more choice and lower price for hand-to-hand weapons, while a Guild founded in the Hunting Reserve, will have discounts on ranged weapons.

A rich and powerful Guild will be able to afford to buy valuable weapons or weapons of a higher quality that will enhance the technical skills of the mercenaries and enable them to carry out even more devastating attacks.
It is also said of the existence of weapons subjected to ancient arcane rituals and which therefore have daemons vital essence. These very rare arcane weapons are covered by an aura of mystery but seem to have the destructive fury of their corrupt masters in the battlefield.