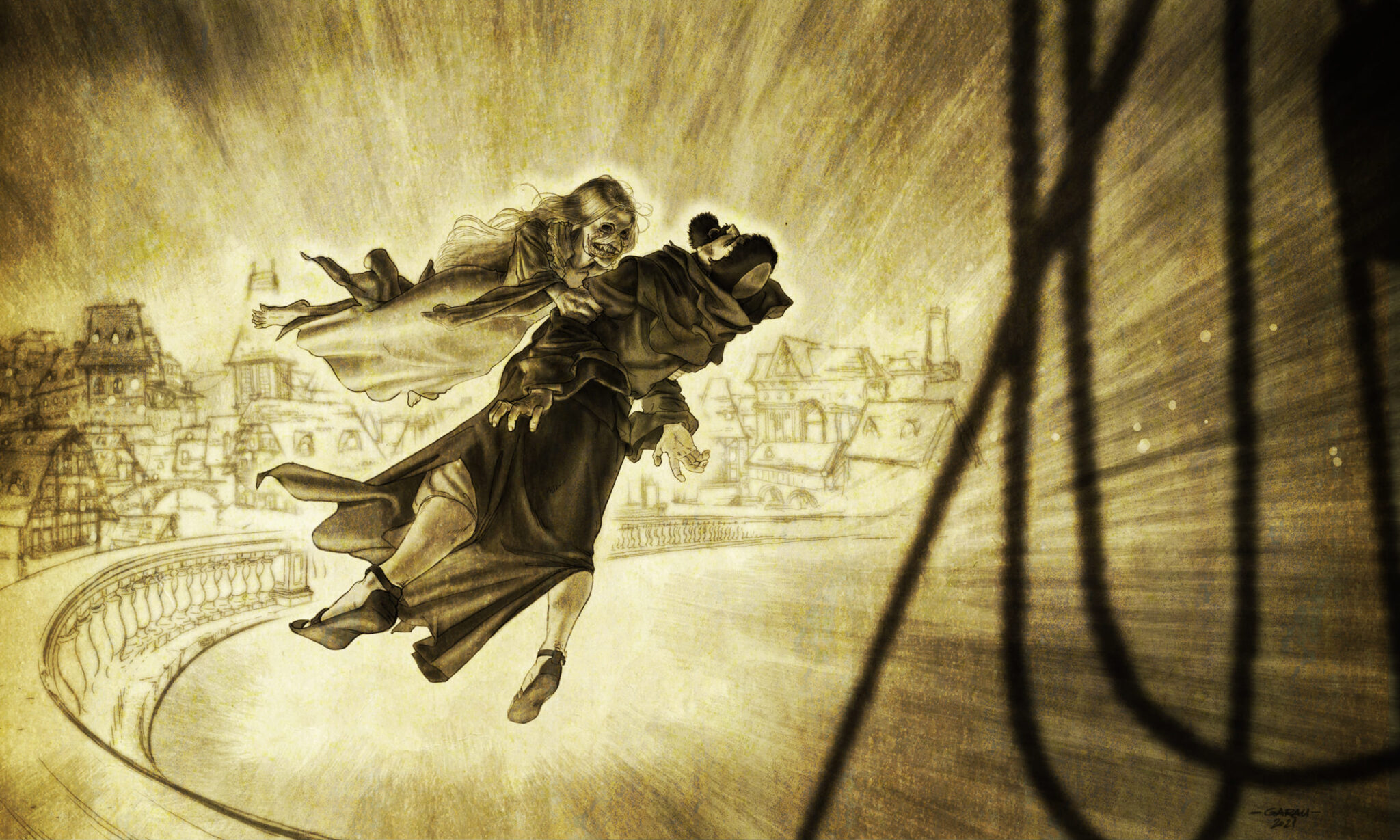 I was roaming without a precise destination through woods where I had been walking for some weeks.
The soft and feeble light of the full moon was hitting the dense forest vegetation, thus making the path in front of me still visible and walkable.

A thin and ghostly mist rose from the ground; it seemed animated by a light and impalpable breeze, surrounding me while I was walking, closing behind me thicker than before.
Actually, I was lost and soon it was clear to me.

I had been roaming for an indefinite time. Each tree looked identical, each with roots powerfully clinging to the ground and knots and ribs so deep in the bark that they looked like eyes and mouths grotesquely watching me, sometimes mocking me, sometimes pitying my wandering loneliness.
I was about to lose hope. The fog was all around me, and whispers and murmurs seemed to be calling me from the darkest parts of the woods.

Suddenly my attention was drawn to what appeared to be the figure of a young woman standing not far from me. She was walking barefoot, wearing a silk tunic and was surrounded by a faint glow that made her hair silver.
I hastened my pace to reach her but I heard a dreadful cry, thousands voices screaming all together, breaking the silence of that cold night. I instinctively put my hands to my ears looking all around terrified and I saw the young woman running away through the dense vegetation and I, scared, began to chase her.
I had the feeling of being a prey, hunted by something, perhaps a wild animal. I felt its presence behind me without having the courage to turn around.

I ran trying to reach the silver-haired girl.

Suddenly the wood gave way to a huge barren plateau dominated by a majestic mountain whose top seemed to be cut: surrounded by crimson clouds with lightnings and thunders, the dark hill right in the center of the immense plateau seemed to be the place where the girl was quickly heading.

As I ran gasping, I began to notice strange bumps poking here and there through the undergrowth from the ground.
As the chase was my priority, in that moment I did not pay too much attention on them, until I stumbled on one of them. I looked at them closely and I was horrified: they were human hands and arms coming out from the ground.

They were all around the plateau; some of them seemed to wag as fish trying to escape from asphyxia.

The distant thunders echoed harrowing voices while the air was pervaded by a sweet and suffocating stench.
Despite this dreadful situation, I instinctively started walking faster desperately trying to reach the girl, hoping that touching her delicate skin it would all have been over and I would have finally been safe.
Close to the mountain, the woman entered in a dark tunnel at the bottom of a rocky ridge. I hardly reached it, climbing cutting rocks, slippery for the heavy rain.

I was extremely tired; close to the tunnel I started breathing regularly. I had a quick look at the dark tunnel; was it ending up in the deepest dark side of the Earth? The smell there was disgusting. However, an unknown force was pushing me to enter. I did it.

It was completely dark inside, and I walked there for some time. Each noise and each whisper scared me. I realized I could not control my legs, which were taking me inside the tunnel, even closer to the center of the mountain.
A fainted light became stronger and stronger. Suddenly a distant light torn the darkness apart. I was reaching the end of the tunnel.

When I finally reached the end, my eyes were hit by the strong light. I instinctively covered my face with my hands and I screamed. Little by little I was able to see again; what I saw was unbelievable.

The inside of the mountain was completely hollow. Looking up I could see the clear sky between the high rocky slopes. Looking down I could see the huge city built on majestic terraces converging towards the crater’s center.
Exiting from the tunnel, I moved towards the middle of the square where I was standing. The distant towers and all those beautifully decorated palaces gave me a feeling of peace and calm.

I went closer to a railing on the side of the square and from there I could have a view of the landscape of the valley. I surprisingly saw the silver-hair girl was doing the same. Trying not to scare her, I calmly approached her and when I lightly touched her shoulder, she turned over me.

What I saw was disgusting and I almost fainted. Her face was completely covered in wrinkles and putrid skin, from the forehead to the chin.

With a rapid and unnatural movement, she seized my arm; I felt a strong pain and I heard my bones breaking for the powerful grasp of that skinny woman.

I tried to wiggled out from that in vain; the woman was frantically scratching her face with her black nails, scratching away her skin from all around the eyes, making guttural screams. With a desperate cry, the blood flew down that macabre mask. From the deep wounds, surrounded by purple skin, two eyes were maliciously staring at me.
I wanted to stop looking at her but fear paralyzed me and I couldn’t take my eyes out of her.
She drove her thumb above the chin, making a wound similar to an open mouth creepy smiling. From blood, rotten gums and decaying teeth a laugh came out crushing my soul.

In that moment I realized I was floating on the city in a macabre dance. Te majestic palaces were now dilapidated ruins, the towers were destroyed and on fire and in the streets men and women were imploring while they were massacred by armed skeletons.

I was stunned, terrified and disgusted.
The creature was holding me tight and suddenly thrown us in the crater’s center.
Going down at a higher and higher speed, I felt the hot temperature of the fire devouring the palaces and the strong smell of the burned flesh.

I was sure we would have smacked on the ground. However, some meters from the ground, a violent earthquake torn apart the center of the city creating a huge chasm. We fell there.
Everything was whirling and in a couple of seconds darkness was all around me.

The legend narrates that a roaming monk made this dream close to the mountain where the ancient monastery of Loch was built. Thanks to this dream the monk was able to find the tunnel reaching the inside of the mountain…