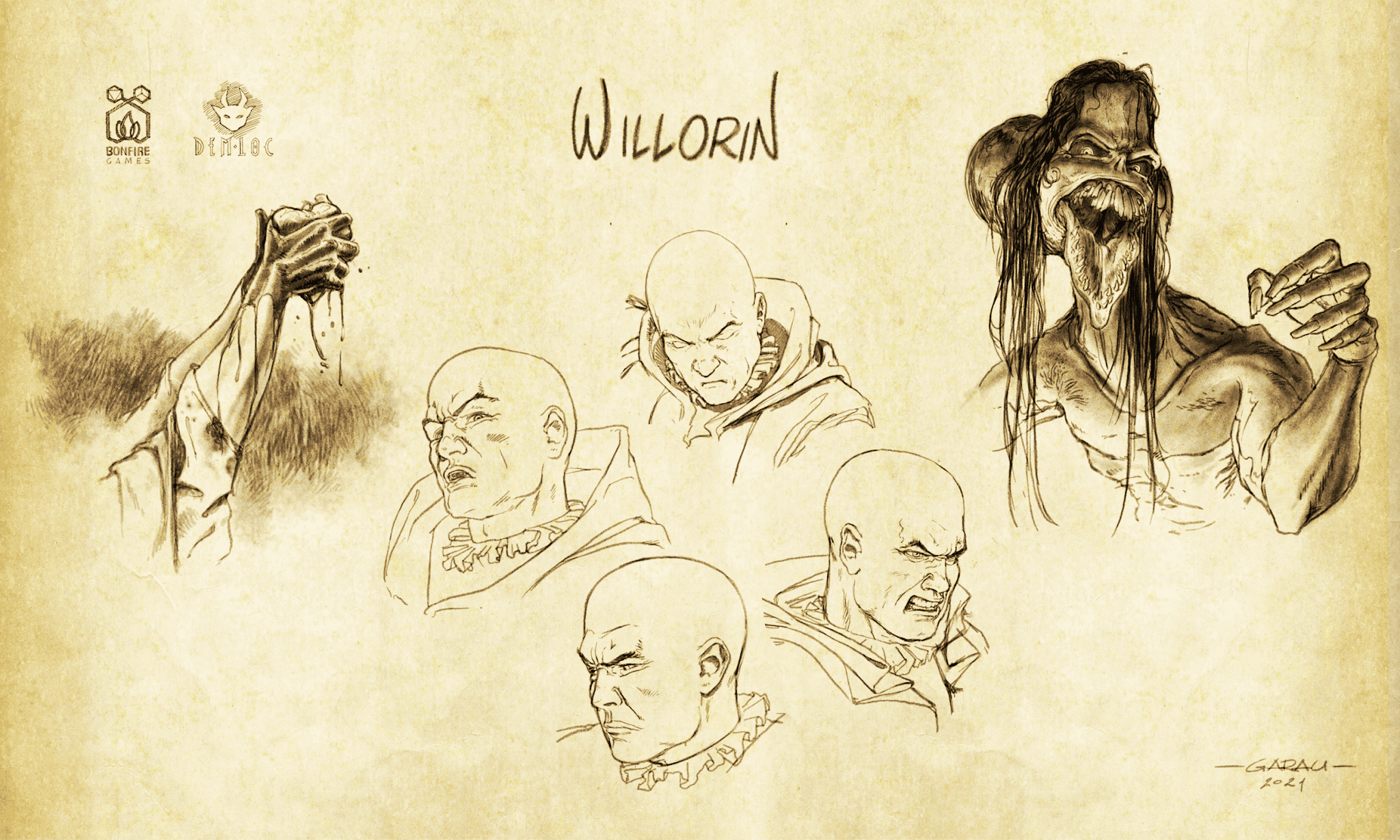 A heavy pouring rain made the path on the steep slope of the mountain slippery. Inside the mountain there was the city known throughout the Empire as Loch. In that dark and cold autumn afternoon, the few guards guarding the entrance gates of the tunnel saw in the distance a figure that, defying the storm, was slowly approaching, holding a knobby stick in an attempt not to sink into the mud.

A man dressed like a monk appeared before them, completely soaked and numb for the cold. Aiming at resolving the matter as soon as possible, a guard came out of the warmth of the guardhouse and approached him.

“What brings you to wander in this storm, wayfarer?”

In response, the man took off the hood that covered his face to show himself to the city guard. He was a completely bald middle-aged man. His face was sunken and he was extremely pale.

“My name is Willorin and I am no more than a humble monk,” he said, saying the words trying to overcome the roaring sound of the freezing rain.

“I am going to the monastery to finish my studies and talk with my master.” Without further hesitation, the guard gestured for the gates to open.

“Do you know how to reach the monastery?”. No longer looking at the guard and nodding his head, the friar quickly headed towards the tunnel leading into the mountain.

Willorin never reached the monastery; some fishermen saw the mysterious wayfarer disappearing into the tunnels near the lake, in the lower part of the city.

In the following days the body of a man completely torn apart by wolves was found in the woods, just outside Loch. The corpse had a creepy look: he was completely naked, the ribs were torn apart and the heart had been removed. Because of the necklace he wore, he was identified as being a monk of the Holy Worship.

Her lids felt heavy and she couldn’t open her eyes. With difficulty he tried to move the fingers of his hand and when he felt the numbness was slowly waning he also tried to stretch his arms. However, with a fearing thrill, he realized they were tied.

Aware that something was wrong, he suddenly opened his eyes: he found himself in complete darkness.

Realizing that he was completely naked and he was lying on a wooden plank with several leather straps that blocked his legs and arms, Gast tried to scream but his mouth was dry. He made a dull and desperate groan.

He had no idea what had happened and did not remember the circumstances that had brought him into that situation. Shortly before awakening completely tied up he was lost in the misty alleys of the Arcane Tower, returning from a mission he had successfully completed. That was what he remembered. He hadn’t met anyone and he didn’t feel to have been followed. But then, due to the thick fog, he had walked on unknown alleys and got lost.

Gast’s thoughts were abruptly interrupted when something slimy, like a long, thick tongue, stroked his left nipple.

The man heard the table on which he was lying creaking as if someone, or something, had been leaning with the whole weight.

When he felt movements above him and desperately tried to free himself, the drops of a hot liquid fell on him and Gast felt that slimy object rubbing on his chest again. The man also felt the light touch of long and fine hair on his face and his nostrils were invaded by a nauseating stench. A cold and inhuman voice whispered disjointed words in his right ear. He terrified broke into a desperate cry and suddenly everything seemed to calm down; he was alone shivering again in the middle of the deepest darkness.

Gast heard footsteps in the distance and the sound of a deadbolt creak open. A lantern faintly illuminated the narrow room in which he was imprisoned. The rough stone walls were covered in moisture and incomprehensible symbols and writings seemed to be traced with blood; on the ceiling, just above him was drawn an aberrant figure with two huge eyes staring at him maliciously.

From that position, Gast could not immediately distinguish the man who had entered the room holding the lantern.

“Where am I and what do you want from me?,” he yelled at the men who, after placing the lamp on a table, seemed busy fiddling with various metal tools, without paying attention to him.

“Release me, you bastard,” he shouted. “I am the terrible Gast of the Crimson Raven Guild, feared and respected throughout DemLoc.”

“And I’m Willorin,” replied the men with a deep and icy voice that seemed to come from every direction and echoing throughout the room.

Gast was petrified by those few simple words.

That time that name was sadly known throughout the city and associated with the most ugly and violent murders.

Terrified he began to scream with all his strength and tried desperately to free himself from the laces keeping him firmly anchored to the table.

Willorin approached slowly and put a hand on his leg, as if to reassure him. A feeling of peace pervaded Gast’s body.

“Be good, don’t be afraid,” the man’s icy voice contrasted with the warmth his touch emanated.

Willorin was dressed in a sumptuous red dress, he was pale and completely bald, and had two deep eyes in an almost skeletal face. That simple touch was enough to completely petrify the prisoner who could no longer move. He wanted to scream loudly but no sound came out of his wide open mouth. Willorin then said some incomprehensible words and pulled out a chiseled knife. Gast tried to wriggle again but his body did not respond to his commands, his mouth was paralyzed in an inhuman scream only echoing in his mind.

The knife slowly approached his chest. The terrified man helplessly followed the trajectory of the blade.

For the burning pain in the sternum, he realized that the weapon had just entered his body. There was a crunch of broken bones and cartilages.

Gast wanted to close his eyes but could not help but stare at that terrible image on the ceiling staring at him while a stabbing pain was shaking his mind and his body. Willorin took a few minutes but finally, with a sharp tug, pulled out the beating heart of his victim.

Gast felt his strength slowly abandon him but an unutterable terror shocked him just before his death.

In that moment he realized that an aberrant creature coming from the most terrible nightmares, was at his side and was staring at him with two huge eyes burning like embers.

Gast saw Willorin offering it his still beating heart while the complete darkness embraced him with its icy arms.