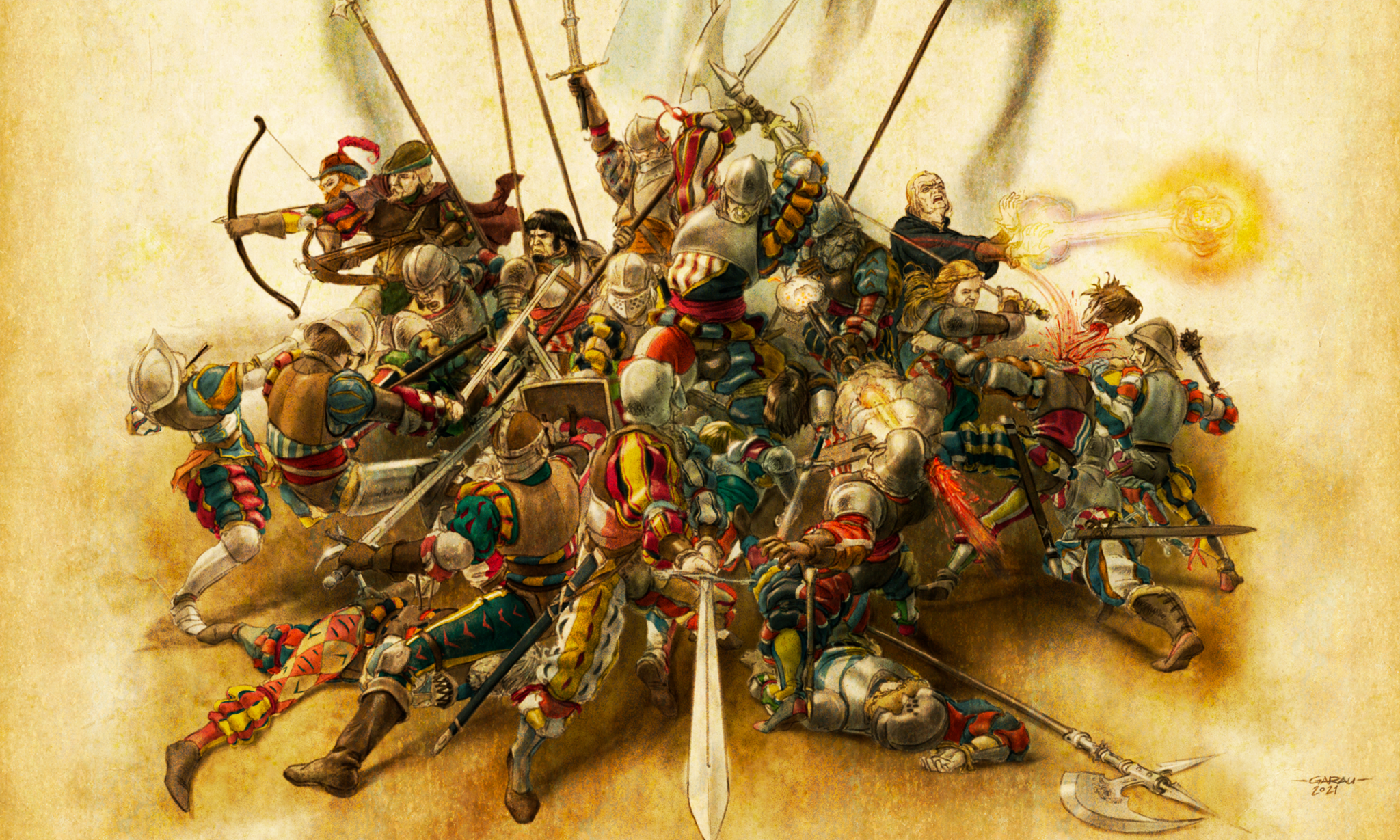 So it had been decided.

The Guild of the Wolves of Kran would pay its debt to a powerful DemLoc family by risking the lives of its best combatants in a fight to the death in the Arena.

At DemLoc, the Arena was a highly democratic place: depending on the size of the debt, creditors could enlist a greater or lesser number of guilds who would fight the debtor Guild.
Bets were the basis of the reward. If the disadvantaged debtor Guild managed to survive, all the proceeds would be used to pay off the debt; alternatively, all the mercenaries would have been brutally massacre morally paying back the creditors.

For some days, to signal the imminent fight, the braziers adorning the ancient building hosting the event had been lit; in all the areas, posters showed promises of large quantities of feods to the Guild Masters who would face the notorious Wolves.

On the pre-established day, hundreds of torches and lanterns were placed along the paths that led from the Slums or the Arcane Tower to the gloomy lands of the Whispering Fields. All the spectators and the fighters who made their way to the Arena traveled in tight groups, accompanied by the incessant sound of drums to signal their presence to the inhabitants.

The ancient noble families of DemLoc moved on showy sedan chairs, escorted by groups of City Guards and mercenaries enlisted for the occasion.

As per tradition, the Guild in debt had to go to the Arena the day before the fight to decide how to organize its strategy and set up barricades or defenses to use during the fight.

The Wolves of Kran were known for their guerrilla strategies and on this occasion put all their efforts in building their fortification with sharp planks and poles right in the battleground at the center of the Arena. Inside this structure the best hunters and sorcerers of the Guild entrenched themselves, while the belligerents, heavily armored and armed with halberds and longswords, were outside the palisades, ready to slaughter any enemy getting too close.

At nightfall the stands began to fill up with the first spectators. Everyone was silent and curiously observed the unique construction built by the members of the Wolves in the center of the battleground.

“The goal of our mission is simple to understand even for some sewer rats as you are,” yelled the old squad leader vigorously shaking his longsword and glaring with the only good eye he had at the squad of mercenaries surrounding him outside the barricades.

“We will kill, tear apart and gut all the members of every other Guild that will be brave enough to face us.”

After another theatrical pause in which he looked again at his fellow comrades one by one, he concluded:

The sound of the drums informed that the fighting Guilds were about to enter the battleground.

The crowd began to roar and in the noble stages in various points of the stands, the standards of the Guilds that would fight against the Wolves of Kran were hanged.

The mercenaries in the barricades observed with a mixture of astonishment and pride the twenty standards. Before that day, no Guild had had to fight against so many opponents at the same time!

The numerous access doors to the battleground were opened and the atmosphere was pervaded by an indistinct multitude of war songs and mottos of the mercenaries of the opposing Guilds.

Nearly two hundred men had entered the Arena to fight against the Wolves.

As soon as the Ancestors stood up, all fell silent; one of the oldest spoke up raising both hands to heaven:

“Whether it is with gold or with blood, the debt of the Kran Wolves will be paid today”.

The crowd cheered for a few seconds

“May Fate assist you and may Loch be satisfied with your limbs.”

At those words the Wolves opened fire. A multitude of bullets hit the nearest enemies, killing some and wounding others.

The different Guilds began to randomly flow together towards the center of the Arena under a rain of arrows and bullets. Some mercenaries were charred by the powerful flames emanated from the hands of a Wolf sorcerer.

The belligerents of the Wolves hurled themselves screaming against their enemies but, in turn, they were hit by a rain of arrows and bullets. Only a few managed to arrive safe at the fight against the opposing mercenaries.

The screams of the ones dying mixed with the roar of the crowd inciting the mercenaries engaged in the fight. The smoke of the blunderbuss had invaded part of the battleground.

A big mercenary cut in two a wounded enemy begging for mercy with a brutal cutting blow. A gush of blood and guts spilled across the ground at his feet as hundreds of spectators inveighed against the victim excited by the violence of the fight.

The situation was definitely desperate, but the orders were clear and the Wolves would not leave even a meter of land to their enemies.

Dozens of mercenaries began to crowd around the barricades trying to tear them down; the enthusiasm was so great that many were pushed against the sharp poles of the last Wolves’ defense.

In that tangle of bodies, limbs and blood some fighters stood on piles of corpses trying to kill themselves with their bare hands, lacerating themselves with fingernails and teeth.

Meanwhile, the sorcerers of the opposing factions fought with blows of flames and lightnings.

The spectators watched with enthusiasm the chaos in that infernal pit.

The fights continued for several hours and the Wolves resisted many of their enemies’ attacks until even the last mercenary of the Guild was extracted from the pile of the corpses of his companions and was gutted before the eyes of the screaming crowd.

That day, thirty Wolves stood up to about two hundred opponents, killing more than half of them. Their debt was paid not with gold but with blood and their corpses were thrown into the dark jaws of Loch.