The fall of Loch 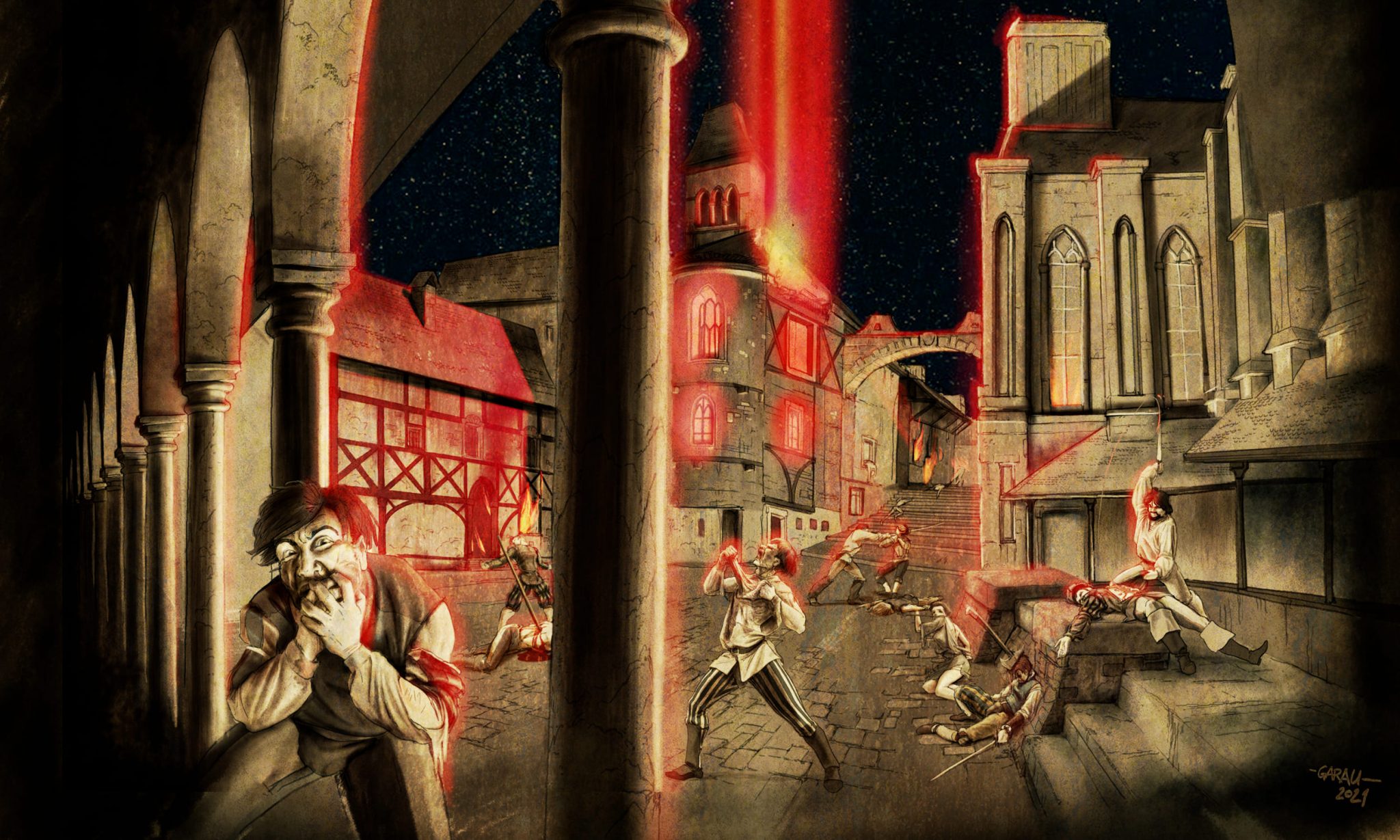 I don’t think I have much time left to spend on this devastated land where I lived my miserable existence.
I feel that life is slowly abandoning my weary body and soon I will be able to reach the Lord and the saints I have always served since I was born.

What I lived tonight has deeply disturbed me and I want these last few words of mine to be a warning to all the wretched people who will find themselves wandering around this damned city.

On this cold winter night, I saw the gates of Hell open, I saw the jaws of the worst evil forces seizing the people of this city and I saw the primordial madness that governs this hellish place.

I left the monastery for the city council to attend the interrogations of the heretics, as I commonly do every evening. The heretics have been plaguing also our quiet village, in the middle of remote mountains. I was walking along the main road coming back to the sacred walls when the whole city was shaken by a loud roar.

Despite being the middle of the night, I saw a soft red light in the sky. While I was trying to calm some passers-by frightened by the loud noise, I noticed with growing concern a beam of scarlet light coming from the monastery, like a bright spear rising into the sky, coloring in red the thick clouds above us.

I hastened my pace trying to reach my brothers as soon as possible when I heard the echo of a distant whispered litany that seemed to come from the darkest corners of the narrow streets of the town.
That indistinct, whispered voice pervaded the air and penetrated my ears, as if it was right next to me. All the people I met on my tortuous journey to the monastery heard it.

The words were incomprehensible and, yet, I could not help but listen to them. Even when I covered my ears with my hands, those disjointed phrases kept creeping into my mind.

The reddish light made everything around me surreal, even the places I knew well now looked gloomy and mysterious.

As I got closer to the monastery I came across some gruesome scenes.
In the vain attempt to silence that dark litany, some people had cut their ears off and were now staggering and screaming with rivulets of blood running down their cheeks.

The air was already pervaded by monotonous whispers, crossed by cries of pain and terror.
In a small square on my right I noticed a group of agitated people but the darkness prevented me from clearly understanding what was happening. I approached cautiously and what I saw shocked me.

In the middle of the circle of frantic men and women there were naked men crouched over a disemboweled corpse. These naked men, completely smeared with blood and bodily fluids, were frantically devouring intestines from the corpse.

People around them seemed in a trance, crowding and jostling as in a frenzied dance. Their eyes were lost in the void staring at that macabre scene. Their mouths were foaming.
I stared at that nauseating scene and I realized that everyone there, including myself, was repeating aloud that absurd and incessant litany. As soon as I realized it I cover my mouth and tried to stop talking.

I started running in a desperate attempt to reach my brothers and try to understand what was going on.
Chaos was all around in the streets. Many buildings had been set on fire, mutilated bodies were laying on the pavement. Groups of naked men were fighting with stones and rocks. Everything seemed to be dominated by a senseless, hysterical and destructive frenzy.

I tried to avoid groups of insane people who were killing and mutilating every human being they could spot. Finally, I arrived in front of the monastery.

The ancient building had been torn apart by a powerful explosion, all the colorful monastery windows had shattered, the roof had collapsed and a beam of bright light came out from the center of the monastery in sky.
I was stunned by the continuous litany which had now turned into an increasingly deafening choral song.
Death and madness were all around me.

I approached the mighty church doors. Strangely, I didn’t find them as barred as they should have been. I slightly opened a door and I came inside the building.
In that moment all the noises which had been hammering my mind for long ceased.

The monastery was illuminated by an intense red light that seemed to come from every direction. Apart that, the whole church seemed intact: the vaults finely covered in frescoes were showing all their magnificence above me and a soft warm light filtered from the very high monastery windows.

The pleasantly warm air of the room was pervaded by incense, everything seemed wrapped in a very thin blanket of fog that made the objects vague.
As I was walking along the central nave I noticed with amazement that my brothers were sitting in pray in the choir stalls, wearing red ceremonial tunics. The fog was slowly thinning. I hastened my pace and approaching them I realized with horror that very little of those monks remained: their bodies were stuck in unnatural and obscene poses, with empty and charred eyes sockets, their mouths wide open in silent screams.

I could not hold back a desperate scream as I observed that surreal scene; my voice echoed through all the naves.
The bodies of my brothers began crumbling as if they were made of sand and I began to back away wanting to get out of that desecrated and cursed place as soon as possible. I was taking those timid steps towards the exit when I saw the floor was covered in blood that seemed to be boiling. The indistinct whispers of that rambling litany started again and just at that moment the earth began to shake. The church began to collapse and I started running in a desperate attempt to reach the exit.

I woke up some hours later.

A collapsing column hit me and now my legs lie helpless under it. I am blocked by this pillar that has mangled my limbs, the blood comes out profusely and I am aware that soon everything will be over.
I am exhausted and soon I will not be able to write anymore.

I heard women screaming that the ancient astronomy tower collapsed into the abyss. It seems that Loch was wiped out in a single night and I could not help but look at these inexplicable events.
This should not have happened. The Ancient Lords had guaranteed us the safety of the town in exchange for our nefarious behavior.Are we being punished for our mad studies of ancient arts?

It seems I am dying. However in front of me I do not see the embracing light of heaven but the dark oblivion of the infernal hell.