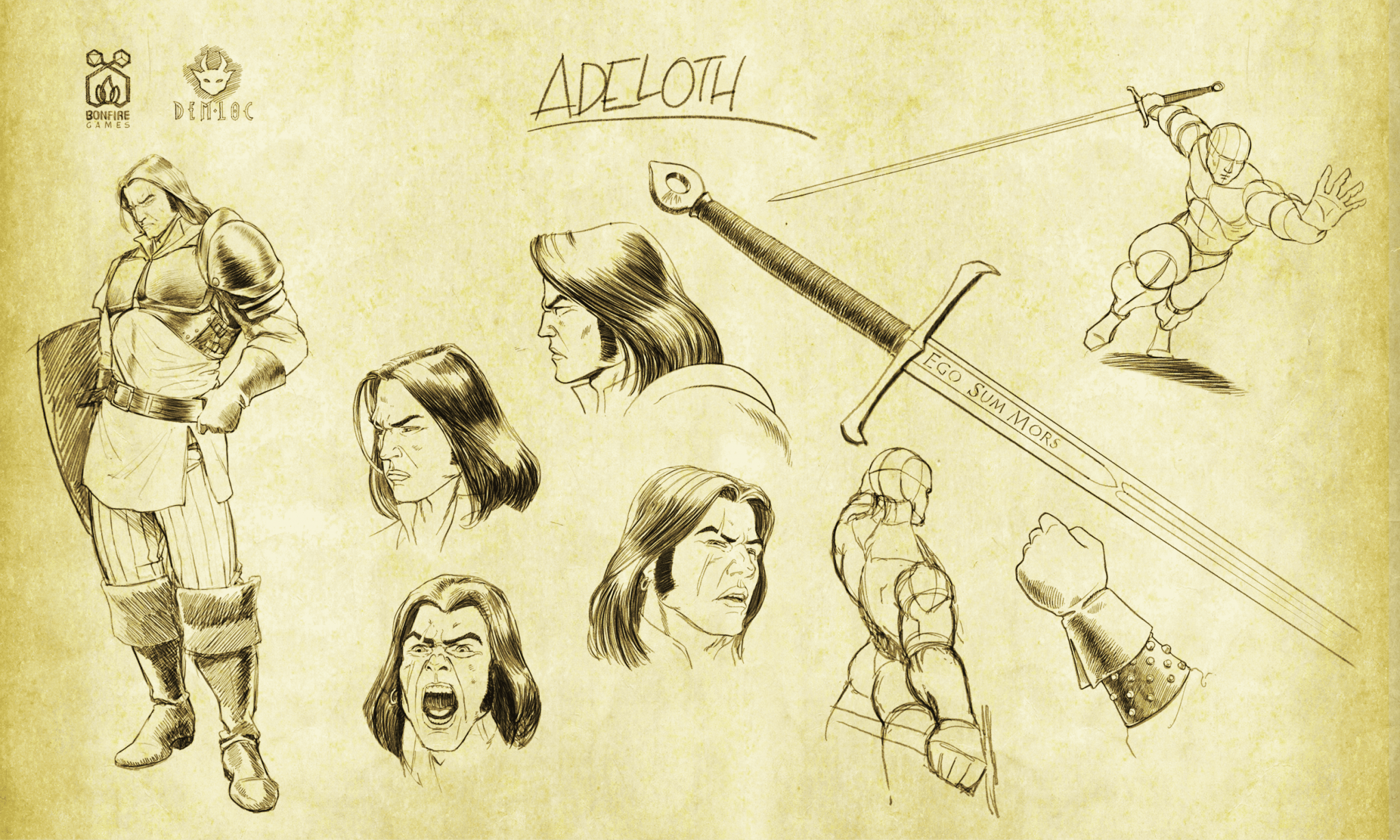 At the sunset of a very gloomy autumn day, from the darkness of the wood surrounding the remote village on the mountains, a creature appeared.

In a silent atmosphere, the inhabitants of Dämonen Loch saw a man riding his mighty black horse crossing the thick scrub separating the woods from the first houses of the village, close to the outer walls of the city; he seemed to be chased by the rising mist on the stream running through the rugged rocks of the mountains.

From his appearance and his colorful clothes it was clear he wasn’t a local inhabitant. He actually had been travelling all around the Empire looking for a new battle to fight. Since he was a child he had personally experienced the war, both in battles and in lethal fights to assert the requests of some rich noblemen. That is why his body was covered with several scars.

Most of them were insignificant wounds with no connection to any specific memory, except the one crossing his face from the center of the forehead down to the jaw crossing his right eyebrow. It had a specific meaning: it was made by his stepfather the day of his 18th birthday.

That day his mother was killed in front of him. With a bitter smile on his face, the man thought that in the end only a bad memory, the scar and the notch on the hilt of the sword remained.

When the tall man was about to enter through the gates on the mountain, a drunk city guard, without any fears of him or of death, halted him with his hand. “Foreigner, if you want to enter and stay in this city you are welcomed but you have to donate your horse to the Hole”.

The man pulled the bridles on the horse and got off with an agile leap. The ground under his feet creaked for the weight of his body and his heavy armor chipped and bruised for the many fights fought.

Without paying attention to many eyes looking at him, the man took his possessions from the saddlebags tied to the saddle: some gold coins, his knife and his beloved claymore. He turned to the guard; with his profound and deep voice he said: “You can have the saddle, I don’t need it anymore”, and putting his hand on the big longsword on his shoulder he added, “Everything I need is to quench my baby’s thirst.” A bit worried for the manners of the foreigner, the guard mumbled: “Don’t worry, you are in the right place”

The warrior carelessly passed the group of men who had approached the horse, eager to finally be able to eat fresh meat but, after a few steps, he felt someone touching his pants: a child, thin as a skeleton with deep lively eyes was there. “What’s your name sir?”

The man looked down at the child and with a grimace close to a smile, he replied: “Adeloth”.

It’s not so common to meet a man with a single sword cutting blow. However, the big warrior, Adeloth, was not new to these types of situations.

The huge sword with the Latin inscription “I am death” on it was breaking bones and wounding muscles starting from the collarbone.

The weapon was so heavy and sharp and the cutting blow.was so strong, the blade went down to the ribs and the abdomen reaching the sacrum of the unfortunate man.

All men fighting in the alley stopped for a while, petrified by that macabre scene.

Adeloth pulled the longsword out of the carcass still standing in front of him: the eyes of the unfortunate warrior fighting against him were staring at him, vitreous and soulless. He loved seeing that expression of terror on his victims’ faces just before exhaling their last breath.

Adeloth pulled out the sword, holding the hilt tight with both hands ready to start fighting against the remaining enemies.

They looked at each other and, tired for the efforts of the fight and scared by the situation they had just seen, they quickly ran away in different directions, disappearing in the tangled alleys in the darkest and deepest part of DemLoc.

Adeloth’s Guild mates shouted loudly. They won. The only one who was not so satisfied about the victory was the big warrior. He was frustrated and started hitting a corpse’s head laying on his feet.

Adeloth was like that; his fighting style wasn’t perfect but it was really effective. On his colorful clothes he liked wearing only the armor and a single shoulder strap to be more free in his movements and able to show all his indifference towards death.

Adeloth was brave and courageous, he didn’t fight for gold and fame. He was a war machine, fulfilled by the fight clamor, by the blood flowing from severed limbs and by the desperate screams of his enemies aware of the painful death they were coming to.