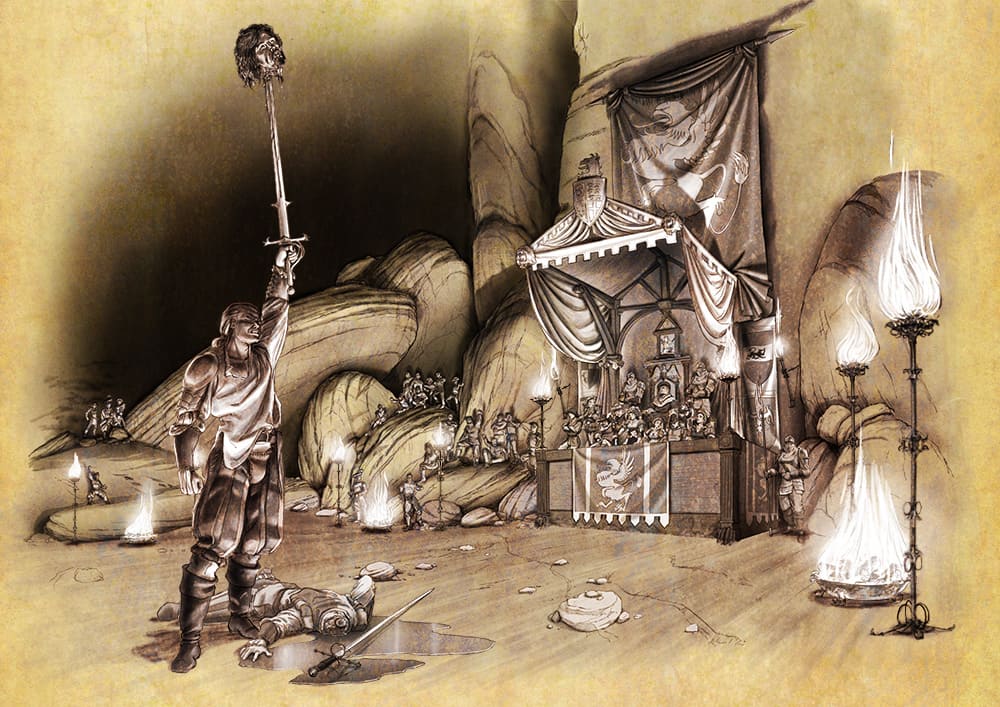 Dämonenloch or Hole of the Daemon is the name of a village built inside a deep and gigantic dip on the top of a mountain.  This name refers to the horrendous hole where all kinds of filthy and terrible beasts come out from, the orifice of the hot and deep hell.

Before being called with this resonant and creepy name, the small town was simply called Loch, the Hole, located around the majestic monastery. This name can only be fully understood by knowing the unusual shape of the land on which the village was built: a huge crater cutting off the top of the mountain. In the middle of it there was a small, narrow and deep lake, surrounded by luxuriant groves, a common hunting and fishing destination. This clear small lake was the main source of sustenance for the inhabitants of the town.

For many decades life went on quietly, the village became prosperous by fortifying itself and a majestic tower was erected near the monastery for astronomy studies.  The population grew along with its trade with the main towns of the Empire.

The Great Heresy and the war which hit the town shook the peaceful inhabitants of Loch forever. The shadow of obscure and ancient lore even reached the most remote areas of the imperial city.

In the months which follow, disappearances of children, tales about daemonic rituals and strange creatures wandering on the narrow alleys on moonless nights spread widely. Following these and other frightful events, the inhabitants suffered from fear and concerns and entire families were accused of heresy and witchcraft. After short trials and confessions extorted by torture, hundreds of people were burned alive in the city squares.

The end of Loch took place on a cold winter night. The inhabitants heard a deafening roar, followed by a strong earthquake which destroyed the buildings closest to the crater’s center. The streets of the town were soon full of terrified and dazed people. Everyone astonishingly saw a beam of red light coming from the monastery and casting into the sky, accompanied by a dark and evil litany. The air was soon pervaded by the smell of sulfur and rotting meat.

Within a few minutes it was all over.

After another loud roar, the vault of the chapel was torn apart by a terrible explosion and a landslide followed. The tallest and most massive tower in the city sank intact in the lake.

The following morning the astonished inhabitants of the city realized the lake was swallowed up in a deep crack on the ground. Right in the center of the crater, stood an ancient circular building hidden under water for long time: the Arena.

Following these events, the town was renamed Dämonen Loch and was abandoned; only a few of the survivors of the catastrophe lived in the ruins of the village to escape the war tearing the Empire apart. For a few years, as the Great Heresy continued and the heretical forces seemed to corrupt everything, no one has been speaking about the wretched town of Dämonen Loch.

Wen war ended, the armies were disbanded and thousands of mercenaries began roaming the town in search for easy conquests and riches, often creating conflicts and tensions with the inhabitants of the richest and most prosperous regions. After years of wars and famines, the populations wanted nothing more than order and peace.

To contain the “mercenary crisis”, an attempt was made to create a free zone in which mercenaries could give free rein to their violence without involving the citizens of the Empire. Due to its isolated location and its obscure fame, Dämonen Loch seemed the most suitable place to house the mercenaries, a reprehensible honor it had to bear.

Mercenaries chose the Arena, the ancient building that emerged from the dried up lake of Dämonen Loch. Within those filthy walls the most famous combatants could fight and clash to solve issues of honor or old disagreements. Thanks to the growing fame of this mysterious building, many mercenaries, murderers and butchers rushed to fight with each other, waiting for the beginning of a new war.

In the city, trade flourished again, mostly illegally, and many scholars moved to the town. The Holy Cult defined them as heretics, due to the archaic and daemonic  they worshiped.

Over time, the Empire became more secure; Dämonen Loch did not. In the town several organized groups of mercenaries joined together in the Guilds. They soon began fighting to take control of the city and, above all, to seize the huge amount of gold and precious artifacts passing through the streets of the town every day. The huge Arena was soon considered a symbol to attract adventurers and desperate people ready to do everything to earn a few coins and a bit of fame.

I still remember when I crossed the huge and dark ramparts of the city for the first time. I saw burnt and decomposing bodies hanged to the armored doors that blocked the access to unwelcome visitors and prevented inhabitants from leaving.  For me, as for all my companions in misfortune, the city built inside a dormant volcano in the middle of the most inhospitable mountains I have ever visited was simply called DemLoc.

And there I was forged by thousand of battles

and there I faced unspeakable pains

and there my body will lie bloodless, within the walls of the dark Arena.