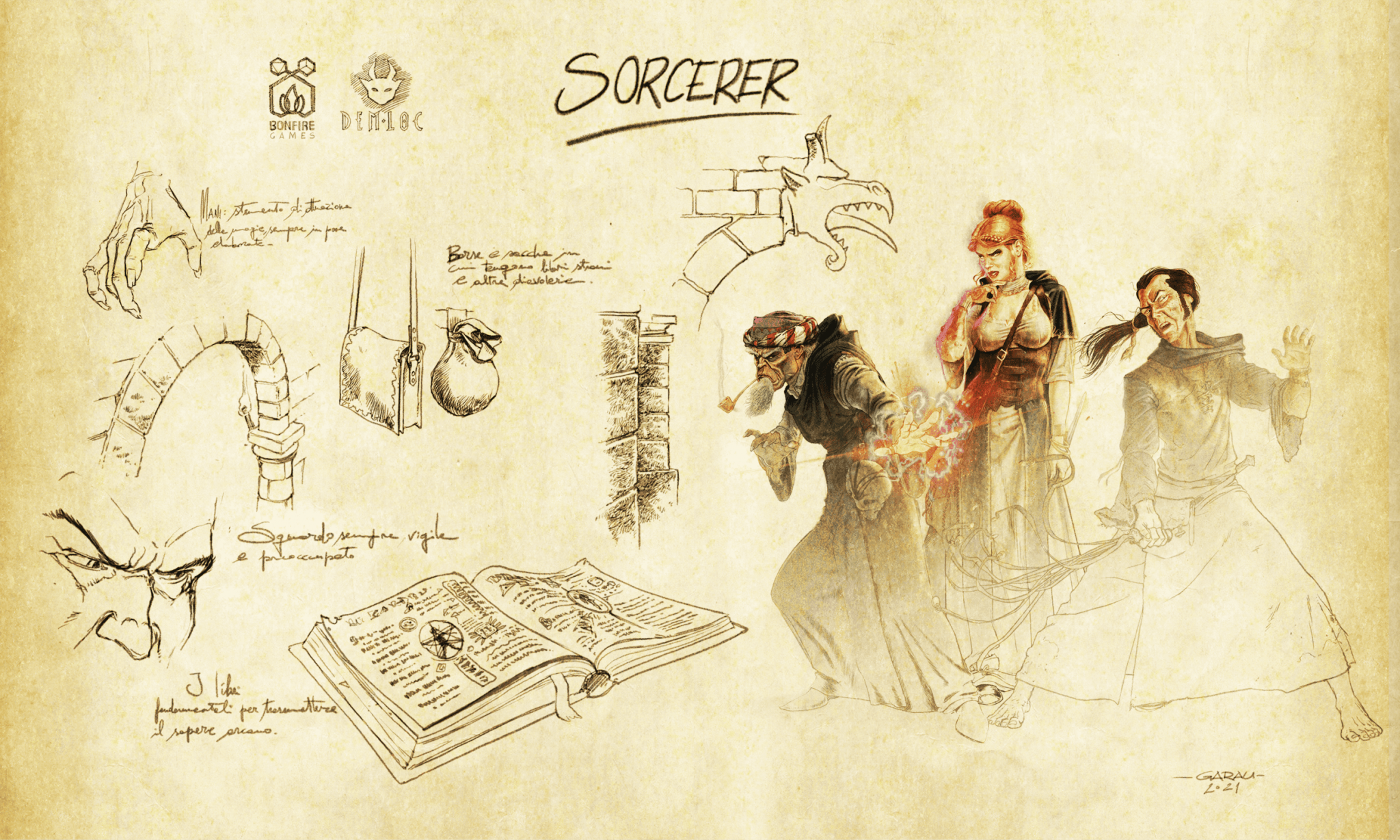 In the area of the Arcana Tower, between the old towers and the narrow streets surrounded by the mist, a type of mercenaries with absolutely unique characteristics live: the Sorcerers.

Always hunted down, imprisoned, tortured and brutally executed by the courts of the official Worship of the Empire, the Sorcerers keep a deep and visceral rancor towards the human race, without any exceptions.

The city of DemLoc attracts hundreds of heretics from all over the Empire like a rotting carcass attracts groups of hungry flies.

After Loch Downfall, the Sorcerers meet in the halls excavated under the Tower, in dark ravines and narrow passages (totally unknown to most DemLoc residents). There they devote themselves to the study of the daemonic doctrine, to macabre rituals and evocation experiments, with the purpose of increasing their knowledge of the arcane arts and better serving the daemonic castes, their dark and corrupt lords.

The Sorcerers are reluctant to join Guilds from another areas of the city of DemLoc and to move away from the Arcane Tower. Nonetheless, the smartest Guild Masters know that having these mercenaries in their armies allows them to have devastating power at their service and are therefore willing to make serious compromises and considerable payments in order to have them in their groups.

By reciting elaborate litanies of ancient codes, the Sorcerers are able to conjure unspeakable powers capable of liquefying the thickest armor, making flesh burn like dry straw and strongly terrifying even the bravest and most courageous combatant.

Through their absolute dedication to the arcane arts these women and men are able to resist the corrupting flattery of daemons and are therefore able to put into their body all the ancestral and destructive power of these terrible beings. Between myth and legend, there are many stories about the deeds of the most expert sorcerers, even capable of invoking and summoning in the earthly world the embodied form of the daemons they worship. They thus access a being of pure dark energy, evil and terribly devastating to put into battle, with the result similar to what a restless hunting mastiff would cause in an orphanage.

All this power coming from the arcane arts carries with it a price to pay. The bodies of the Sorcerers, stressed by their incessant experiments and studies are faint flames dying in the middle of a stormy night. Consumed by their own knowledge, the Sorcerers cannot think of taking part in hand-to-hand fights and if not adequately protected they are easy targets for enemy mercenaries.