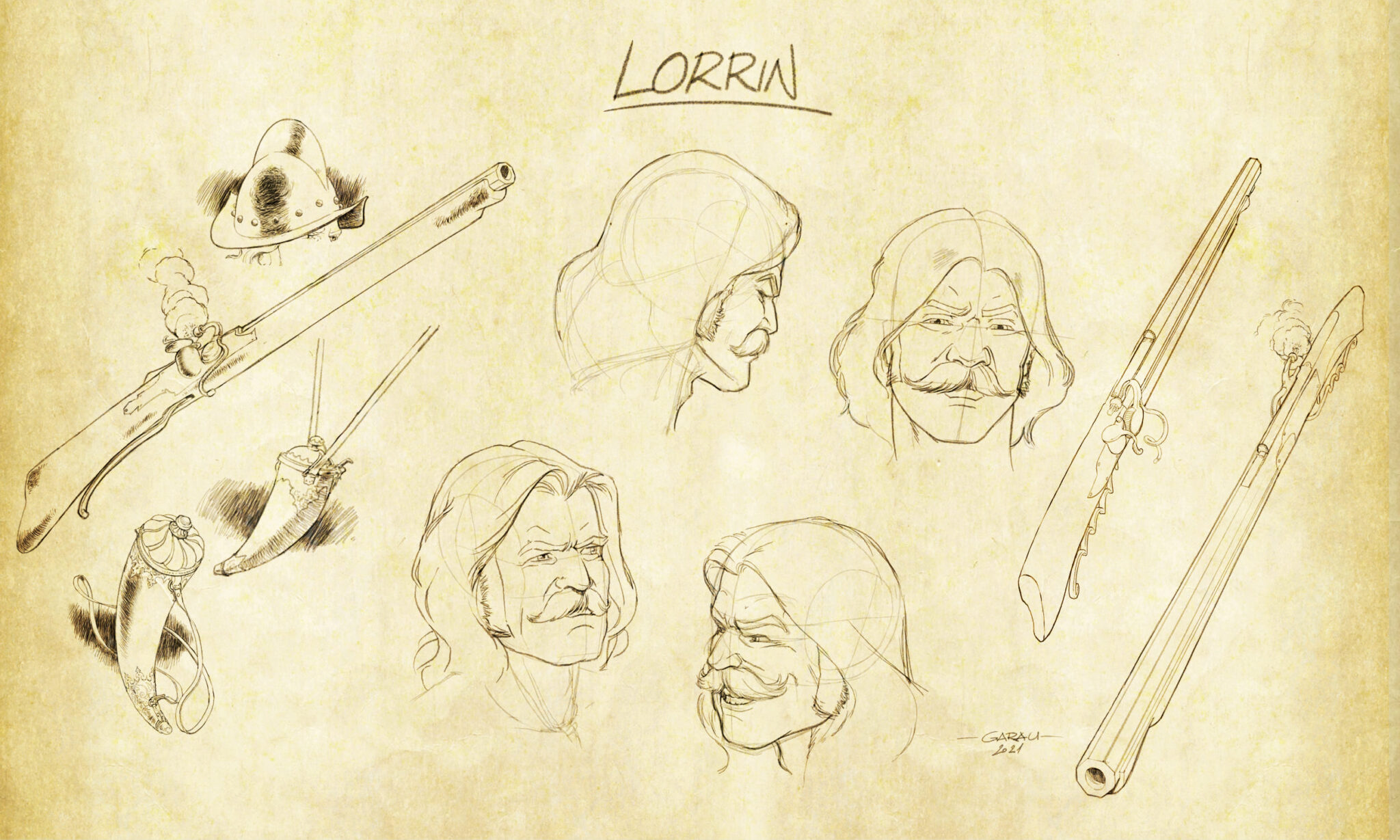 An indefinite location in the woods of the Eastern Empire
Year 250 since Loch Downfall.

“You have only one chance to save yourself, my friend. And you have to run faster than the wind”.

That man, called Lorrin, sniggered with a blunderbuss in his hand. He was lightly blowing at a smoky wick used to set fire to the gunpowder in his weapon.

“I now untie you and you’ll be free to go; but if I hit you…”. The thick smoke of the fuse covered Lorrin’s wrinkled face; the light reflected on his wild eyes “…in that case, you’ll be mine”.

The prisoner was down on his knees; he swallowed and started trembling while one of Lorrin’s men cut the strings which were tying him like a kid.

As soon as he was free, the man tried to run fast; he was finally free. However, he had been tied and torturing for days and his muscles were now numbed. After making a couple of steps, he fell down his face on the mud.
Lorrin and his men bust into laughter, looking at that pathetic scene.

Gathering his strength, the prisoner hardly stood up and tried to run again.
However, as soon as he was able to run some meters away, a roar burst and a bullet pierced his abdomen, penetrating his stomach.

Screaming for the pain, the man fell again face on the mud. Then, he started crawling away from his captor.
“Sorry if I immediately shot but you know…these new weapons are not so precise on long ranges and I didn’t want to run the risk of letting you run away,” Lorrin shouted and approached with fast strides the man he had just shot at.

Once reached the painful man, with blood copiously going out from his wound, Lorrin started hitting him violently on the back of his head with the butt of his still smoking blunderbuss.
Once finished, at his signal his men reached him.

“Hope you give me more satisfaction as meat than as a runner”, he said laughing while his men were taking the filthy clothes off the prisoner. Then, Lorrin noticed a parchment coming out from the pocket of the prisoner’s vest, laying on the mud.

Before being thrown on the flames of the fire along with the prisoner’s belongings, Lorrin caught it: It was a picture of an aberrant creature devouring men and women. In that daemon’s jaws there were also several representatives of the Holy Worship.

Lorrin sniggered thinking about he reaction those arrogant priests would have had in seeing that paper.
Written on the warned-out paper there were these words: “Dämonen Loch, damned city and home of the worst mercenaries”.

While the men with him were feasting and drinking, Lorrin couldn’t stop thinking about that paper. He perfectly knew his days as brigand would have came to an end sooner or later. He had already heard several stories about that damned city but he did not give importance to them.

Maybe it was really the time to leave and begin a new adventure, discovering if legends were real or just the creativity of some drunkards.

“I would definitely have asked some feods more to solve this situation”.

Lorrin spitted on the feet of the two mercenaries in front of him. Pampering his thick beard, he was looking at the end of the clearing where a group of halberdiers were trying to helplessly fight against a huge and armored warrior who had just cut an opponent in half.

“Lorrin, please,” one of the two men said bowing down on his feet, “that huge warrior has already massacred five of our men and if we cannot get rid of him, our Guild Master will be extremely mad!”

Lorrin was thinking about the situation while the huge warrior was decapitating another halberdier with a wide cutting blow.

“Ok,” he said pointing at the big culverine laying on the grass behind him, “I’ll test my new knick-knack you have kindly brought here for me”.

While the fight was going on and the huge warrior was killing several people with his big sword, Lorrin placed his rudimentary weapon in front of the target.

Singing an obscene song famous among mercenaries of the Empire, Lorrin put on the chamber of the weapon a metal shotgun slug a bit bigger than an apple. Then, he pulled a smoking fuse out from the belt.
While pointing the big chamber of the culverine towards his target, he gently blew on the wick to let it burn.
When the chamber was in the right position, he set the gunpowder on fire and he shot.

The roar was deafening: the ground trembled for the blast, the air was pervaded by a thick gray smoke and by the typical strong smell of burned gunpowder.

The shotgun slug from the culverine targeted the armored warrior just under his right eye.
For the strong impact, the cheekbone was destroyed; blood, teeth, bones and brain flooded on the last two exhausted halberdiers who were trying to contain that terrible enemy.

Almost decapitated, the body of the huge warrior fell back on the ground with a loud noise.
Silence was all around for some minutes. All people there heard a strong hiss due to the explosion.

Suddenly, Lorrin bust into laughter. The smoke slowly cleared and people there could see the extravagant hunter pampering his terrible weapon with enraptured eyes.

“With you on my side I could become the king of this fucking world,” he said at the end.