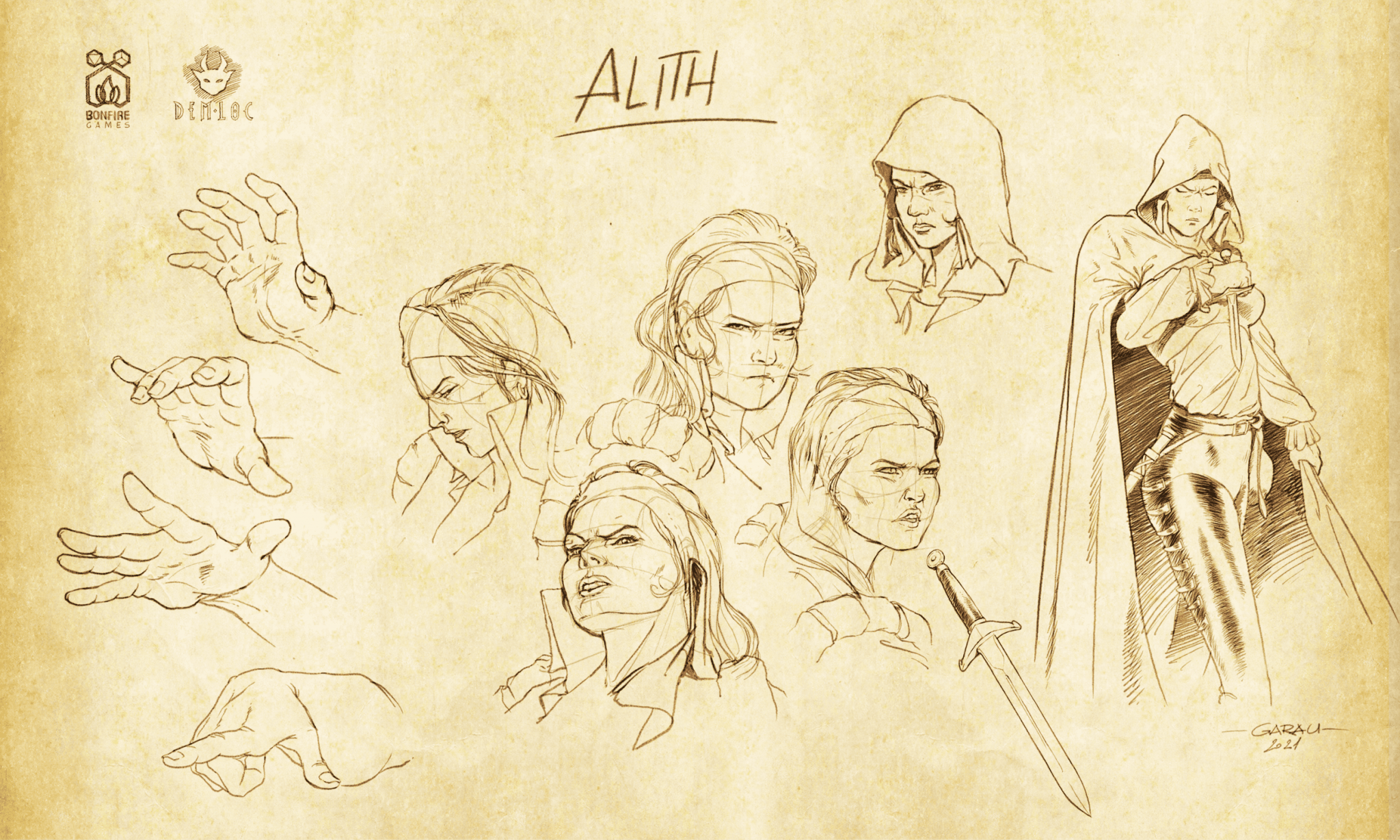 The girl, called Alith, was running desperately in the alley along the orphanage from which she had just escaped for the umpteenth time.
Her hands were still stained with Peter’s blood, another orphan, whom she had brutally stabbed in the throat with a sharp terracotta shard.

Alith was sure her life would change now, just as her master had promised her.
She heard her mother’s voice again calling her and reassuring her.

Also on her first escape from the orphanage she had heard a voice calling her towards Loch. It was a sweet and feminine voice that reminded her so much of her mother’s. She was curious and she moved away from the town reaching a crevasse; following that soft female voice she ended up entering the dark mountain.
However, at the bottom of a cave, in a narrow space lit only by dozens of feeble candles and full of ancient amphorae and vessels, he found not a woman but an old man huddled in a corner. He was incredibly thin and his body was pockmarked by a disease.

The man, with a soft feminine voice, invited her not to be afraid, because she would be safe with him.
Slowly, as if bewitched, little Alith approached that strange apparition: two big black eyes stared at her. Reflected on those two big pupils, the flames of the candles seemed to have a life of their own.

The old man never told her his name. He promised her that he would never abandon her and that he could help her meet her mother again. In return, he only asked Alith to visit him every day.

The bright-eyed old man began to teach her the arcane arts and slowly Alith realized she heard her mother’s voice calling and reassuring her every time she harmed anyone.

The old man whispered to her that if he wanted to see her mother again he would first have to fill with the blood of her victims all the ancient vessels in the room where they met daily.

Alith agreed and the old man gave her an ancient and worn necklace to seal their mad pact.

Sitting there for several hours, the raven-haired young woman stared at the entrance of the tavern, waiting for her target.
To pass the time he had been engraving with her knife confused scribbles on the table. The tavern boy noticed it but did not dare to tell the woman to stop. He preferred to mind his own business as it was common in those areas if you wanted to avoid problems of any kind.

That puny girl was emanating a frightening evil and cruel aura.
The door opened and a man in bright clothes, certainly a Dignitary, entered the tavern followed by a group of fully armed mercenaries. Alith’s eyes thrilled as she saw the young man sitting at a table to have a word with the Guild Master controlling the tavern. Without attracting attention, the woman put her knife away and, covering her face with the hood of her cloak, went out.

As she though, in the alley four other mercenaries were waiting for the man, harassing those who had the misfortune to pass there.
Thanks to the darkness and thick fog in the alleys, Alith hid near the tavern, waiting for her prey to come out. The minutes seemed like hours and the girl was thrilled by the idea of carrying out her plan.
Pleased at having successfully concluded a horrible deal, the Dignitary went out into the alley followed by his guards. He moved towards a secondary road heading at the hoists bringing him back in a safe place, the Market Area.

Everything was going according to plans and Alith followed the group clutching her knife, ready to take it out as soon as they got where she knew.

As they entered a narrow square surrounded by tall destroyed buildings, Alith gave the signal to her Guild companions singing an ancient litany her master had taught her. She was pervaded by an intense arcane force which shook her body, then a thunderbolt went out from the hand she was stretching out towards her enemies.
With a roar the bolt shot in the air and crossed the square hitting two enemy mercenaries. The incandescent thunderbolt pierced both iron and flesh. The two men, with a huge smoking hole in their chest, fell to the ground without making a sound. The electric discharge killed them instantly without leaving them any chance of surviving.
A rain of arrows and darts fell from the buildings hitting the group of mercenaries who were trying in every way to protect the terrified Dignitary. Unfortunately for them, the ambush was successful and within a few minutes they all died.

As previously ordered by Alith, only the Dignitary was left alive in the middle of those riddled corpses.
Slowly approaching her prey, Alith mocked the man: “Unfortunately you should have chosen me as your guard, arrogant bastard!”.
With a quick move the woman knocked down the Dignitary and jumped on him, locking his arms with her knees and torturing his face with the knife.

The man begged for mercy while Alith relieved her cruel anger with enjoyment on the man’s ears, nose and eyes. He wanted to tear every single shred of flesh from that body.
When the Dignitary stopped screaming and moving, Alyth stood up, completely smeared with blood and shreds of flesh. Her face was strangely relaxed, her eyes closed.

As usual, at the end of a massacre, Alith could hear her mother’s voice thanking for killing in her name.