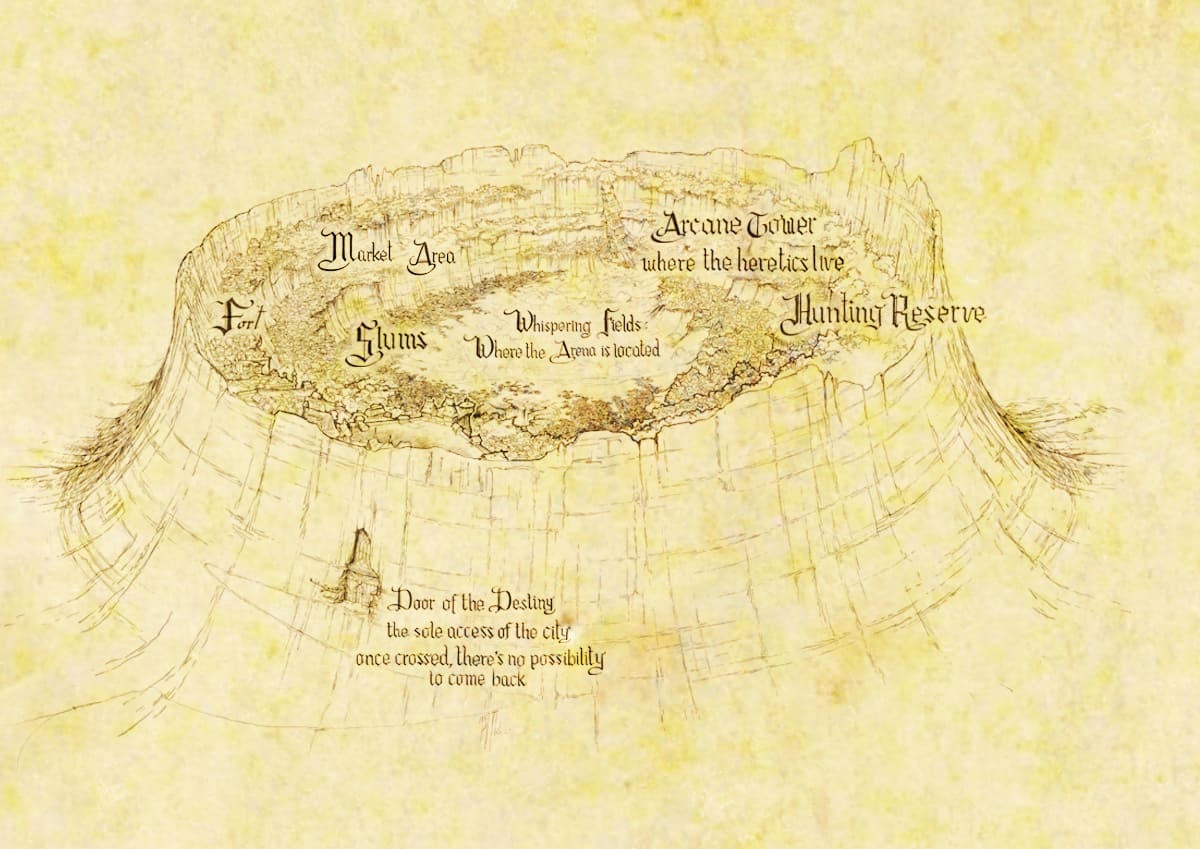 Located in an ancient funnel-shaped volcanic crater, the city of DemLoc is divided into 5 areas on 3 different layers, Each layer stretches into huge rock ledges where the buildings of the different areas were built on.  Each layer is divided by huge, smooth and steep rocky walls, over 800 feet high.

From the highest to the deepest, the areas are: Hunting reserve, Fort, Market Area, Arcane Tower, Slums.

Only the Market Area is located on an entire layer; the other four areas are located on concentric semicircles which are connected in pairs by mule tracks and steep stairs.

Going from one layer to another layer of the city of DemLoc is possible through a complicated structure made of hoists, windlasses and pulleys.

These structures allow passing from one layer to another; however, they are extremely precarious. Ropes frequently brake, and men, objects and supplies could fall into the void. Houses built close to the rocky walls dividing the 3 layers commonly have broken roofs and people tries not to transit in those areas of the city to avoid being crushed under supplies or corpses of people falling from those structures.

The entrance of the city is in the Market Area. A massive wooden door covered in iron sheets, called the Door of the Destiny, prevents from accessing into a gallery connecting the city with the world outside. DemLoc has no other entrances.

The Door of the Destiny is opened once a week for the merchants to enter into the gallery and collect the goods brought at the foot of the volcano. Once passing through it, no-one can leave the city. In front of the Door there’s a huge square; on its end and from the balconies surrounding it, it’s possible to view the entire city of Dämonenloch.

Under this balcony there’s Loch, a 300 feet chasm the city’s original name comes from.

No-one knows how deep Loch is and no-one dares to come closer to that terrible filthy hole where occasionally jets of smelling stream come out from. However, this chasm plays an important role for the city: Loch’s population puts there all possible junk: excrements, rubbish, waste and the “unworthy” people, all people who are not worthy of living in DemLoc.

As earlier mentioned, once entering through the Door of the Destiny, there’s no possibility to leave the city: one can die or can be thrown in the dark jaws of Loch. Every month a ceremony celebrates the “unworthy” people fall from the balconies of the square at the entrance of the city of DemLoc.