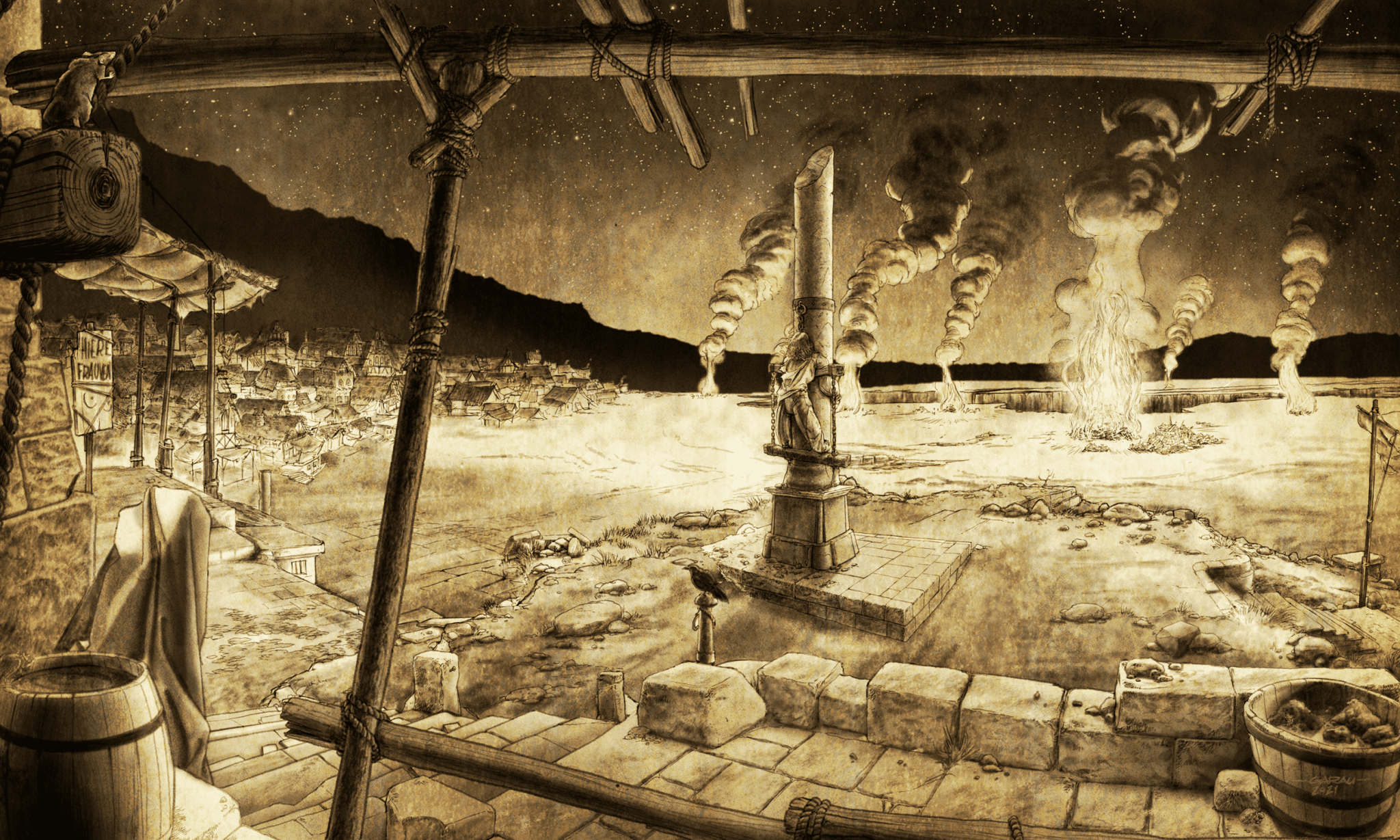 Slum is actually not even the real name by which this area is called; it is rather an adjective, and a fact. It does not even have a name and everyone is okay with simply pointing it out like this, without anyone being confused.

In this area, which occupies the deepest semicircle in the third level of the city of DemLoc, even the structure of the streets is terrible, houses are located without any criteria and collapse without any attention.

The Slums expanded with its shacks on the remains of an ancient settlement that re-emerged only the day after the fall of Loch, when the lake at the bottom of the volcano was drained. Over the years, everything that did not find a place in the other areas of DemLoc ended up in the alleys of the Slums, so that today it has come to be what it is: nothing more than an indistinct tangle of precarious buildings lived by people of every type, chasing a few feods without any scruple.

The narrow and winding alleys are infested by puddles of sewage, making the air in many parts of the area unbreathable due to the stench. In its uncontrolled expansion, the buildings of the Slums came to touch the Loch, the famous hole giving the name to the city and into which everything and everyone who does not serve the community has always been thrown. At first no one bothered to wonder what implications this choice might have.

People living in the Slums are not used to ask questions (other than the number of coins they can earn in carrying on a specific task) but when in the streets dogs started talking and the dead started walking along them, then the unbridled and lawless individualism characteristic of this area was set aside. An old sorcerer addicted to gambling confirmed the suspicions connecting the arcane and aberrant presences to the well. The the only solution he proposed was to surround the hole with light, stopping in this way the raids of these arcane entities. Some simple rules were introduced, shared by all and still respected today.

Perennial bonfires were organized, placed no more than 6 fathoms around the edge of the Loch edge and no more than 8 from each other. Any inhabitant of the Slums would serve a bonfire night awake and alert to rekindle the fire.
Among the many sentinels of the bonfires, more than one told of frightening events that occurred during the dark and freezing winter months: Some people speak of having seen long black fingers writhing in a desperate attempt to find a foothold to climb out of the chasm. Others tell about fast shadows that seem to wander on the edge of the Loch; they are described as shapeless bodies of absurd mixes of animal, human components and purely grotesque forms.

The tradition of fires is carried on thanks to the stories of those who remember the time before its establishment: ferocious aggressions and mutilations, induction to madness, contagions with horrendous diseases are some of the stories with which children learn the importance of maintaining fires.

The fires therefore seem to be the last sign of what is human compared to the dark madness that dominates the Loch.

An air of decay, squalor and despair hovers throughout the area.

It is no coincidence that in it resides the scum, the outcasts, the most unpleasant ones.

However, do not be fooled by the rottenness that dominates this place: even the most ferocious and dangerous murderers of the Empire reside in the Slums, cutthroats and hit men who live in these decaying clusters of houses certain to remain unpunished for their terrible crimes.

DemLoc’s city guards rarely go into the Slums due to the fame of its fearsome inhabitants.