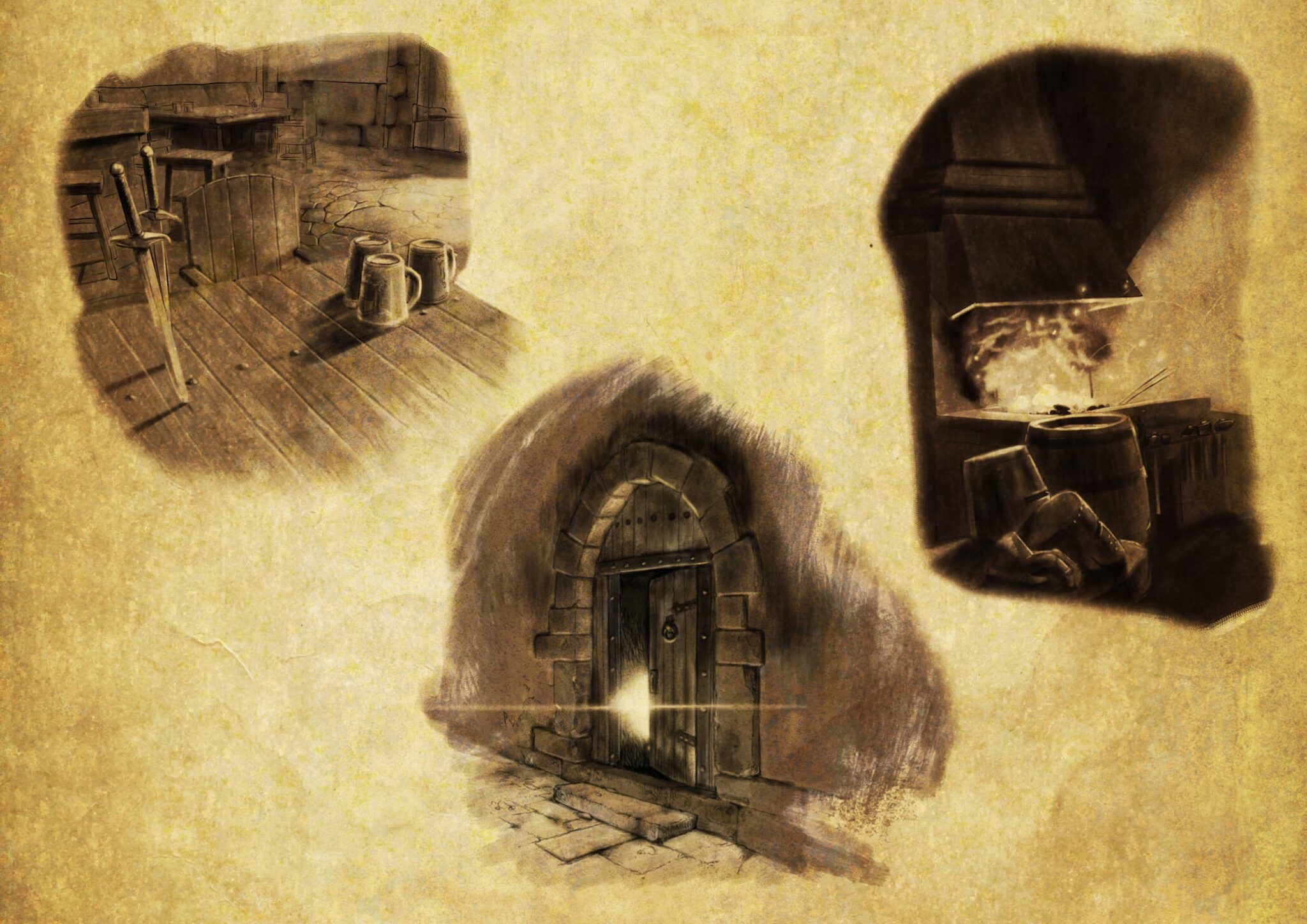 The intricate structure of DemLoc is full with dilapidated and poor buildings housing desperate citizens and fugitives. In the city there are many sumptuous palaces of the Ancestors, many huge and majestic buildings where the headquarters of the Guilds are located. However, the real interest of the Guild Masters is for the so-called relevant spots.

A relevant spot is a very limited section of an area of the city with a very important building inside. For the Guild it is important from economy reasons, for its importance or for ancient studies. Here are some of the main relevant spots in the city.

The Taverns of DemLoc are perfect places where to find mercenaries not yet enlisted. They spend there their time with their favorite activities: drinking and brawling. The Taverns are essential for each Guild with growing ambitions.

Each area of the city has many of them and, according to their location, it is possible to enlist mercenaries of a group or another. The Guild Masters know well that the more Taverns of an area are under the control of their Guild, the more mercenaries of that area will be in their dormitory.

In the Furnaces the blacksmiths of DemLoc work incessantly to make weapons and armors for the Guilds, the Ancestors of the city and the members of the City Guards. It is not easy for a mercenary not belonging to a Guild to purchase a weapon, considering the extremely high price of these shops.

Having some Furnaces under their control gives the Guild Masters a continuous provision of weapons, ammunitions and food for their Guild. In addition, it is possible to have controlled prices if the Furnace is in the same area where the Guild headquarter is located.

There are remote and unaccessible places in DemLoc, where sorcerers usually meet to pray or to learn more about the ancient arts; these mysterious places are called Occult Gatherings. There isn’t a precise map of the Gatherings but, of course, these cursed caves and desecrated chapels are mainly located in the area of the Arcane Tower.

A Guild with the control of different Occult Gatherings could acquire many Code Books for its Ancient Library and demonic artifacts to place in the Daemonic Pantheon. The sorcerers of that Guild could then access to the ancient knowledge without necessarily going out from the dark walls of the Guilds and be out in the external dangers.

In DemLoc areas there are specific shops, the Coinage. In there, gold from mines of the caves of the city arrives and is transformed in feods, the coins commonly used for all economic exchanges. Considering the importance of these places for the citizens, they are protected by permanent members of the City Guard. However, the Guild Masters frequently offer their services to coiners granting them an extra protection in exchange of a few feods for the job done.

In Dämonenloch there are many little squares with statues of the ancient founders of the city or of other important people who lived in its glorious past. A Guild own ensign is hanged on these warned statues to show their importance to the citizens and to other Guilds. Having the control of many monuments will give the Guild Masters the possibility to increase their reputation and fame, offering them the possibility to reach the objective of controlling one of the most feared and respected Guilds of DemLoc.