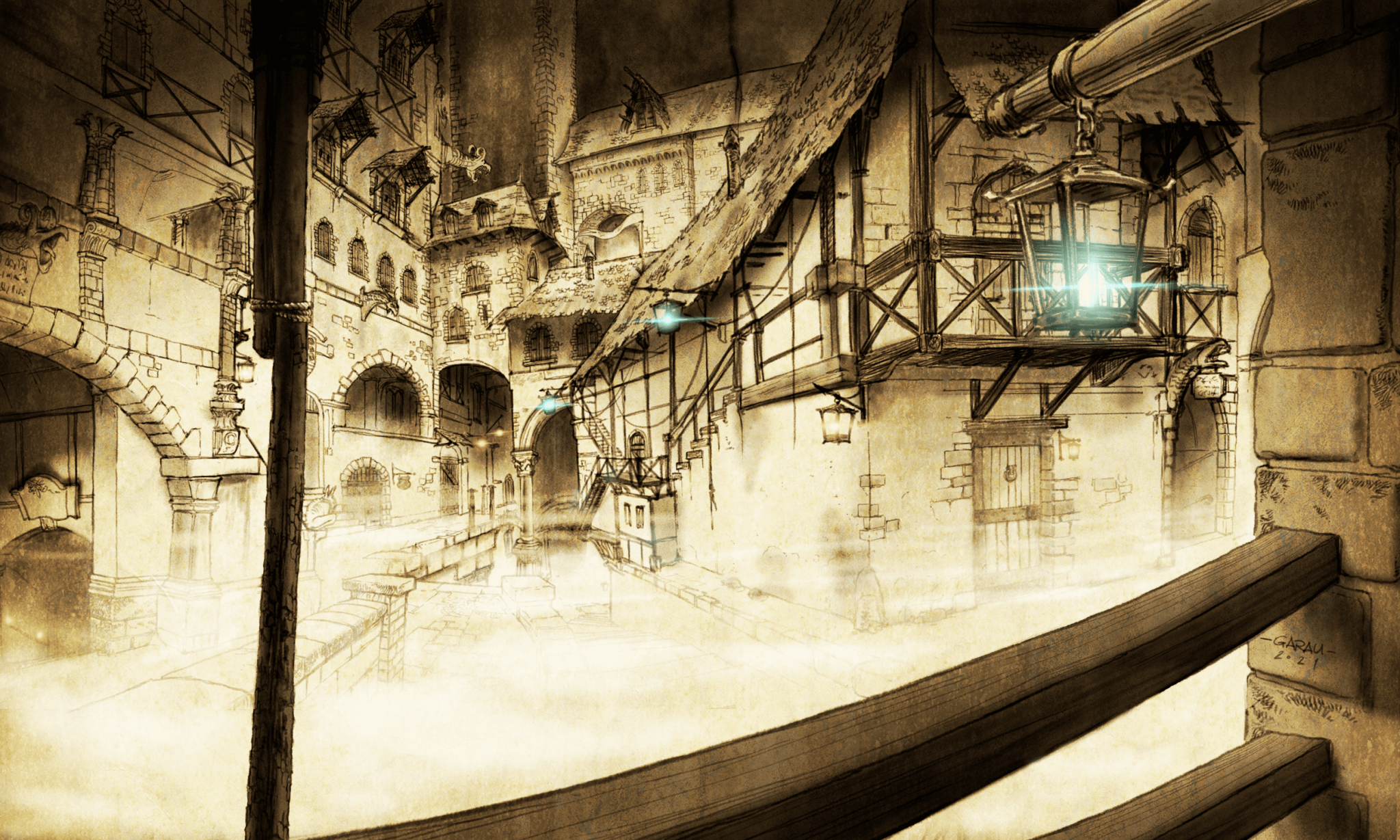 The Arcane Tower area is certainly the most dark and mysterious area of the entire city.

The Arcane Tower itself, from which the area’s name come from, was originally built in the Market Area and housed alchemists and astronomers. Around the huge main structure, dozens of secondary towers and pinnacles were built, making the whole complex a majestic and intricate tangle of buildings high in the sky.

On the night of the Fall of Loch, powerful and dark arcane forces dragged the Tower down along the inner ridge of the crater, holding it as infinite arms or wrapped in the coils of a majestic snake. Moved by an unknown will, she slipped towards the center of the crater. Some considered it as a sign of a metaphysical punishment for the presumptuous arrogance with which men challenged forces by conducting studies and experiments in it.

Although several secondary buildings collapsed during the landslide, the main tower remained virtually intact. It stopped its absurd descent and was moved in a slightly tilted but stable position, held in such a delicate balance that it seemed constantly about to collapse. According to legends, one night some daemonic entities hooked dozens of large chains to the tower, fixing them to the rocky walls surrounding the town. In this way no longer astronomers and alchemists but sorcerers and scholars of arcane arts could feel safe; frequently the halls of the tower where the daemons could eat their souls until they were despoiled like spiders do with flies. On windy days the air flowing between the rings of these great chains creates sinister choirs, as of long and painful moans, echoing throughout the area; the most fearful among the inhabitants swear to be able to distinctly hear litanies.

It is said that in the dark years, after the fall of Loch, a group of heretics hid inside the tower, cold and abandoned, in search of refuge from the persecutions to which they were subjected in the Empire. Nothing written has remained about these first inhabitants of the Arcane Tower, as none of them ever left those walls again. But the stories, handed down orally, tell about a community of men and women, identified as heretics, who began to worship dark arcane entities and, in the mad attempt to join them, began to dig a well right under the Tower. The depth of this well and the extent of the network of connected caves and tunnels increases along with the increase in pints of cider swallowed by the teller. This may perhaps undermine the reliability of the whole story, but the hole remains, anyway.
In the following years other buildings were erected around the Arcana Tower and the neighborhood was populated once again.

Located below the level of the Mercatale Area, in a particularly rocky and not very exposed terrain, due to the imposing presence of the immense tower, the area remains in the shadows for most of the year. A thick and evil blanket of fog pervades the streets down to the smallest alleys in a continuous and unnatural way.
If you stop for a moment, you can hear whispers and moans in it, which is why no one ever stays in the streets of the Arcane Tower.

Due to the constant haze in the corners of the streets, various characteristic lanterns are kept lit: they have glasses of different colors that project iridescent light around. Thanks to the different colors it is possible to orient yourself and not get lost too often.

In fact, it is quite common to get lost in the fog. Many people tell of strange experiences, of being in front of buildings never seen before, constructions described as fused with the rock; with extravagant and extremely elaborate architectures, with towers, pinnacles and sometimes horns or large teeth that seem to protrude from the walls. Among those who have come across them it has become common to define them as the Mouths of the Daemon, and if the description can vary greatly from person to person, all underline with a certain anxiety in the voice the presence of strange dimly lit windows from which someone seems to be scrutinized.

Some even said they had found the courage to enter these buildings, but unable to remember what they had found inside. Then, as they appear, they seem to dissolve into the fog, without anyone ever being able to find their location.

Nowadays in the area of the Arcana Tower the scholars have given way to heretics and mad sorcerers who worship diabolical entities. In the dark meanders of the caves below the tower, they gather to improve their knowledge of the arcane arts, hoping to restore the glory and splendor of their dark Lords.